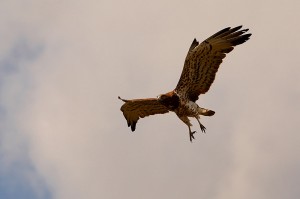 This PIO lies in the municipality of La Cumbre and is surrounded largely by extensive plains, mainly used as grazing for cattle and sheep. This part of the district forms part of the Trujillo-Cáceres plains which are characterised by an average altitude of 400 metres above sea-level and formed mainly be pre-Cambrian and Cambrian shales. The area is within the basin of the Tagus River, whose water-course here, and that of its tributaries form deep, steep-sided valleys, such as that of the Almonte River. At this point we are close to the River Magasca, which runs into the Almonte and we can see its deep valley on the road north of the village of Santa Marta de Magasca, before the junction with the Trujillo-Monroy road (see the map reference).

More about the Magasca SPA

The site offers good parking for up to several cars. It is also accessible by minibus.

It is probably one of the best places to see Pin-tailed Sandgrouse (Pterocles alchata). The other sandgrouse found in the peninsula also occurs here, the Black-bellied Sandgrouse, as well as the typical species resident of the pseudo steppe in Extremadura: Great Bustard, Little Bustard, Calandra Lark etc. In winter there are also species such as Golden Plover, Lapwing and Skylark present. Summer visitors include Montagu’s Harrier and Roller. The area therefore is of great interest all year round. As well as holding the typical species of this open terrain, it is also an important hunting area for large raptors, such as Griffon and Black Vultures and Golden Eagle. One can also add Black and Red Kites, as well as White Stork, Raven and many more.

Options for short walks in the vicinity
The location of the PIO, on a drovers’ trail, allows us to walk for two or three kilometres to the north, along the track, taking us into the Magasca SPA. This is a linear walk which enables us to check slopes in this undulating terrain that are not visible from the PIO itself (see the track on the map).

Location on the map:

Points of Ornithological Interest
How to find them
Idioma/Language: