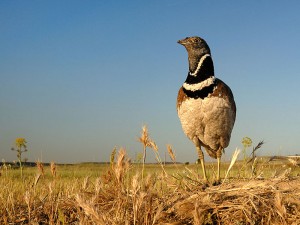 This site offers the pseudo steppes of the Zorita Plains and Sierra Brava Reservoir SPA. It has a landscape dominated by pasture for livestock, with limited arable present as well. This site differs from other pseudo steppe areas in the district because of the proximity between this area, which is rainfall dependent, to the irrigated farmland of the Guadiana plains. Some of this itinerary is barely four kilometres from rice fields near the village of Fernando V.

Location
Here we have preferred to mark three sites instead of focusing just on one. The location is the road that connects the village of Campo Lugar with the EX-355 (Zorita-Madrigalejo).

Parking options
At each of the three sites, one can park the vehicle without obstructing the road. The second site offers most space, indeed a minivan can park there.

Recommended season
All year round.

Interesting species present
Species associated with pseudo steppe landscape have an excellent habitat here. Great Bustard, Little Bustard, Black-bellied Sandgrouse, Montagu’s Harrier and larks are key species here. To these we can add vultures (Black and especially Griffon) and small to medium-sized raptors such as Red and Black Kites, Lesser and Common kestrel, Short-toed Eagle etc). It is also a good place to see Roller, Hoopoe and from the largest passerine (Ravens) to others which are much smaller, but also very attractive such as Black-eared Wheatear. In the winter, this area hosts Common Crane, lapwing and Golden Plover.

Options for short walks in the vicinity
We can also recommend taking a walk on the track that starts at the second site. Here we can enter the heart of the SPA by walking for three or four kilometres.

Location on the map:

Points of Ornithological Interest
How to find them
Idioma/Language: