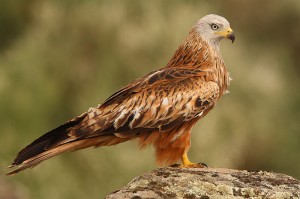 This route crosses several very different ecosystems. These include tree-less plains, dedicated mainly to pasture with some winter wheat. These areas are at the start of the route, after leaving Trujillo and are part of the Santa Marta de Magasca plains and also of the zone that links La Cumbre with Ibahernando, and at the end of the route, the section between Ibahernando and Trujillo. These areas are good for finding steppe species such as Great Bustard, Little Bustard, Stone Curlew, Montagu’s Harrier, sandgrouse…but also Great Spotted Cuckoo, Black Vulture and Roller…although other species such as Black Stork can certainly not be ruled out.

Another of the ecosystems that we visit during the route is the dehesa. This is an excellent habitat for Red Kite, Booted Eagle, Woodchat Shrike, Rock Sparrow and with some luck, perhaps Black-winged Kite as well. As well as these two predominant landscapes, we can also find a deciduous oak woodland as we pass by Robledillo de Trujillo. If you wish to enjoy further this type of ecosystem and also some magnificent views we suggest leaving the marked route for a moment and ascend the Robledillo Mountain (Route PR-CC 232 “Cerro Molliquero”). Here one can find some unexpected species.

The route also takes us across the River Búrdalo on a couple of occasions and this will enable us to increase the number of species seen, in this case with species typical of these river valleys such as Golden Oriole, reed warblers, Moorhen,…..at the time of writing the construction is being completed of a new reservoir on the Búrdalo which will add to the diversity of species that can be seen.

Additional Information of the route:

Description of the route

It is an easy route to follow if one is carrying a map or a GPS, and all is on metalled roads. It starts in Trujillo in the direction of Cáceres along the old national highway. After about ten kilometres we take a left turn for La Cumbre. From there we head to Ibahernando on a straight stretch of road that crosses pasture and arable land. From Ibahernando we travel to Robledillo de Trujillo, Zarza de Montánchez and from there to Almoharín and Miajadas. From Miajadas on the EX-102 we turn towards Escurial and then after a further ten kilometres, take the EX-354 towards Abertura and from there to the A-5 motorway. At the high point of Puerto de Santa Cruz, we take the exit for Ibahernando on the CC-108 and from there to Trujillo on the CC-50.

There is a second option. If you wish to shorten the route and explore quieter roads, we can take the route along the old road from Miajadas to Santa Ana that starts about 2.5 km before reaching Robledillo and which takes us across a vast dehesa. This road is metalled, but in a poor condition and because of the construction of the Búrdalo reservoir, there may be difficulties. The track takes us to Miajadas, or if we do not want to go all the way to Europe’s tomato capital, there is a junction at Villamesias where we can take the A-5 motorway.

This is not simply a good route for birding, but also offers a lot of cultural heritage as well. In La Cumbre its judicial roll in granite is conserved, as well as the fine Asunción church. This locality is also known as a battle site between Isabeline soldiers under the command of Espartero and Carlist solders in 1843. In Ibahernando there is the interesting church of St John the Baptist, built in the 16th Century and the shrine of the Our Lady of the Jara. Miajadas is European capital of the tomato and an important food processing centre, where the Church of St James is noteworthy. Both Escurial and Abertura also have great heritage interests.

Map of the route:

Birding routes
How to find them
Idioma/Language: